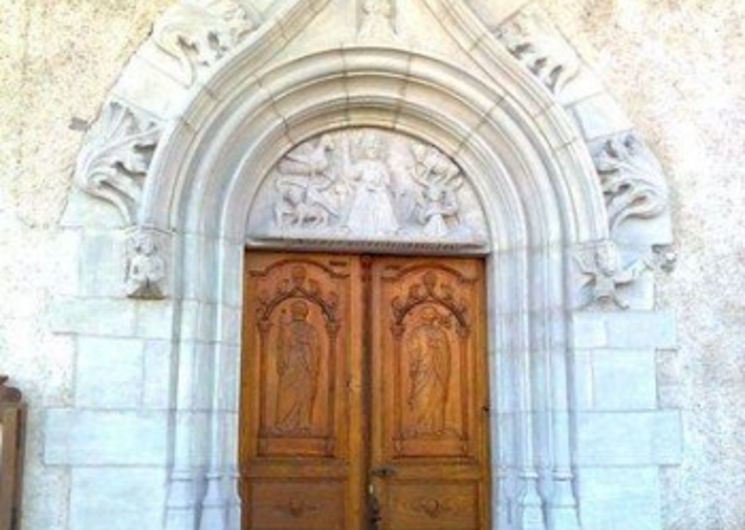 The gothic church of Arrens with its crenellated enclosure, dedicated to Saint Peter, was probably built around 1200, but it has been deeply modified during the centuries following earthquakes, fires and the Wars of Religion. The roof of the quadrangular bell tower (barlong) with skylights from the 16th century was reworked in the 19th century. This bell tower was perhaps once a watchtower. The church has been classified as a historical monument since 1989. The beautiful gothic portal (around 1500) is protected by a wooden canopy and is formed by two arches in accolade, decorated with acanthus leaves, resting on sculpted bases. A devil, on the right, and an angel, on the left, fight for your entrance. The tetramorph represents the Evangelists by their symbol. The sculptures are more frustrating than those of the tetramorph of the church of Luz-Saint-Sauveur in the Toy Country, especially the head of Christ which is rather disproportionate here. The name of the master builder is carved in Gothic letters on the lintel: “Guillem Pey… de Casasus de Be. As you enter the cemetery, surrounded by a low, crenellated enclosure wall, you will find the stoup, improperly called, according to R. Rittter, the Cagots’ stoup, embedded on the right. Decorated with a simple cross, it is surmounted by a window tympanum. There is also a lintel in reuse engraved with a knot of Solomon, according to Pierre DEBOFLE, it would be that of the old hospitalet which was beside the church of Pouey-Laün. By going around the surrounding wall, you will discover a Eucharistic cupboard, reused as a window. It is also surmounted by an arch in accolade sculpted with acanthus leaves. It is from the same period as the North door, around 1500. On 18 May 2011, the end of the renovation work was inaugurated with a very interesting speech by the architect Virginie LUGOL, on the history of the building and the work. “The project consisted of restoring the original aspect of the building, its unique unified colour with lime plaster and whitewash, restoring the harmony of the colours and then restoring the 17th century altarpieces, the gallery and its three arches and the lighting…”Inside, one is surprised by the size of the single nave. A single transept, on the right, and a cul-de-four chevet are the characteristics of this building which covers several periods of construction and renovation. In the choir, there is a 17th century altarpiece with twisted columns. Sculpted between 1673 and 1677 by Abel and Jean FORGUETTE from Izeste (Béarn), it frames the statue of the patron saint of the village: Saint Peter (modern statue). In the attic, an angel’s head is framed by a broken pediment which is surrounded by volutesOn the tabernacle, middle of the 17th century, a console in the shape of an angel’s head supports a “Christ with outrages”. In the left-hand chapel, an ancient Romanesque altar with the five crosses of the consecration is enthroned. It is surmounted by a large polychrome wooden Christ from the 14th century. In the chapel on the right, or of the Virgin, the altarpiece dates from 1635 and is signed Jean DOMEC d’Arrens. See its cartouches at the top, right and left of the attic. With its compartments with niches on two levels, it has all the characteristics of a Renaissance altarpiece. According to Pierre DEBOFLE, the side compartments, with their flat bottoms, should have housed paintings, before being replaced by statues. Some of them, following the revolutionary destruction, are from the 19th century. The whole is surmounted by an attic with a broken pediment. Also remarkable are the lectern, the finely sculpted and chiselled processional cross, and the consuls’ benches. Sources : www.patrimoines-lourdes-gavarnie.fr Traduction automatique par DeepL via DATAtourisme