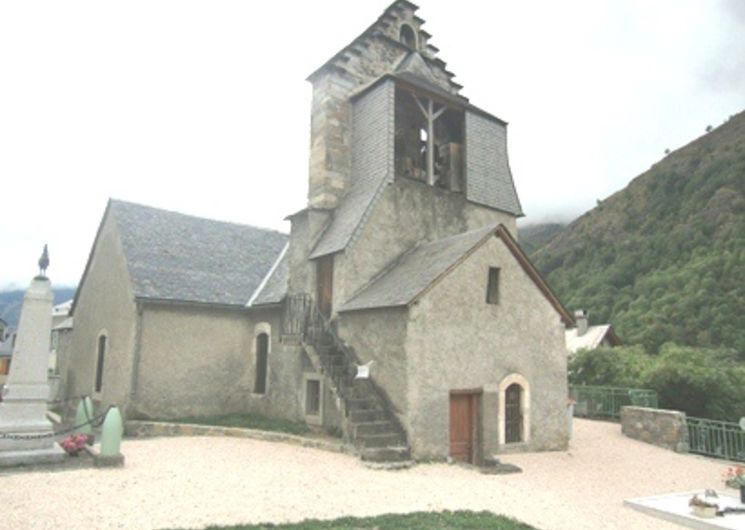 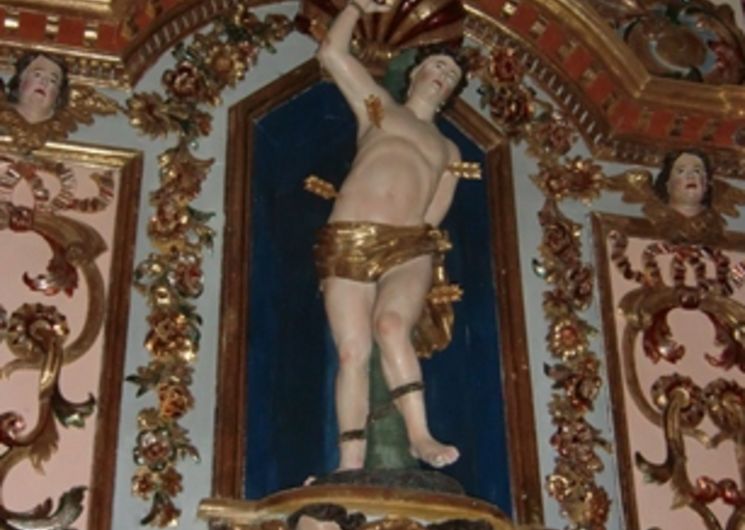 This small 13th-14th century church, dedicated to Saint Sebastian, was built on an alluvial cone on the left bank of the Gave de Pau. It has an original bell tower-wall with redents which has undergone several alterations. This 16th century bell tower, which was probably used as a watchtower, was modified in the 19th century by the addition of a clock. It houses two identical bells from the Dencausse foundry in Soues: they both date from 1886. One of them was restored in 2020. The small one at the top, used as a clock, dates from 1905. Single door to the west. With its two side chapels, the church has the shape of a Latin cross. According to Jean BOURDETTE, in his Annals, the patron saint would have been Saint Laurent. After the restoration of the church, his statue was replaced in the center of the altarpiece by Sebastian and was moved to the left of the altarpiece.Inside, the baroque altarpiece of the main altar is attributed, like the altarpieces of the chapels according to P. DEBOFLE, to the Soustre d’Asté workshop, but there is still some doubt. It represents Saint Sebastian framed by Saint Lawrence and Saint John. The tabernacle, also attributed to the Soustre workshop, is decorated with two bas-reliefs in carved wood, representing on the left, the martyrdom of Saint Lawrence and on the right that of Saint Sebastian. The cupboard in the centre is decorated with a crucifixThe side chapels and the U-shaped gallery were added in the 18th century to make up for the lack of space. On the right, the chapel of the Virgin, with the statues of the crowned Virgin and of Saint Catherine with her wheel, was the seat of a brotherhood. On the left, the chapel of St. Sebastian, with its classically carved statue, was dedicated to another brotherhood of men. For some time, it was thought that the church was dedicated to Saint Laurent, this is due to a misinterpretation of a work by Jean BOURDETTE, who in describing the interior of the church had mentioned the presence of a statue of the saint on the high altar. We can regret the layers of bronzine applied in the 19th century which have tarnished the gilding. There is a confessional at the end of the XVIIIth century with a semi-circular shape. It is topped by a cross resting on wooden supports.The church is open all year round.Sources : www.patrimoines-lourdes-gavarnie.fr Traduction automatique par DeepL via DATAtourisme