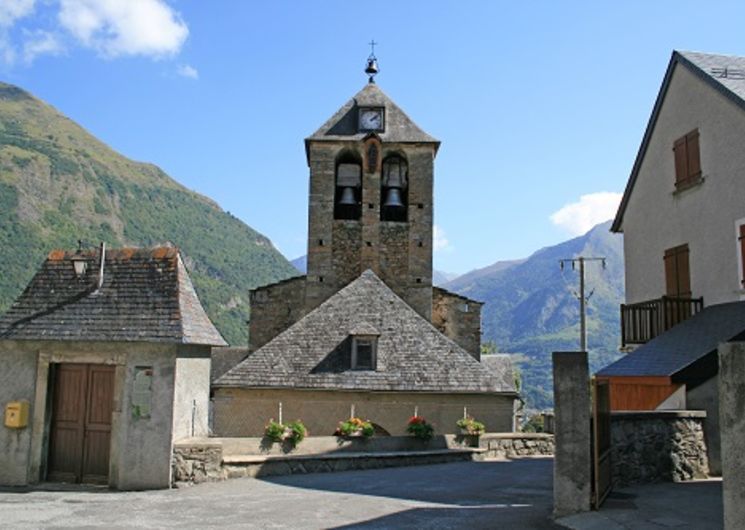 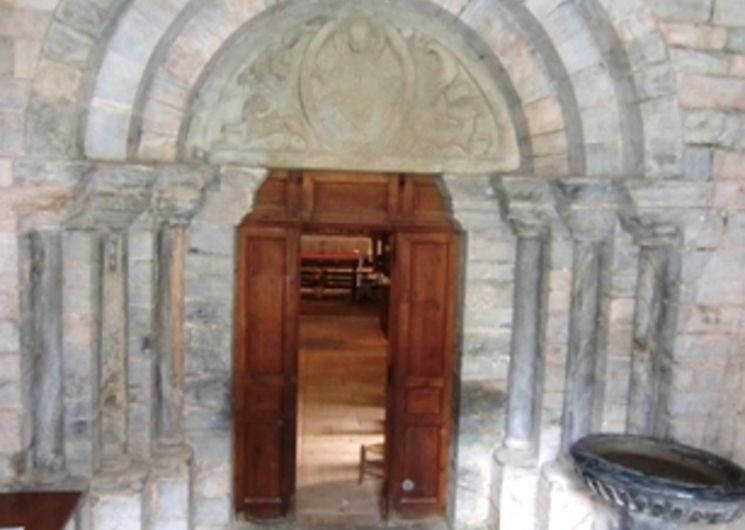 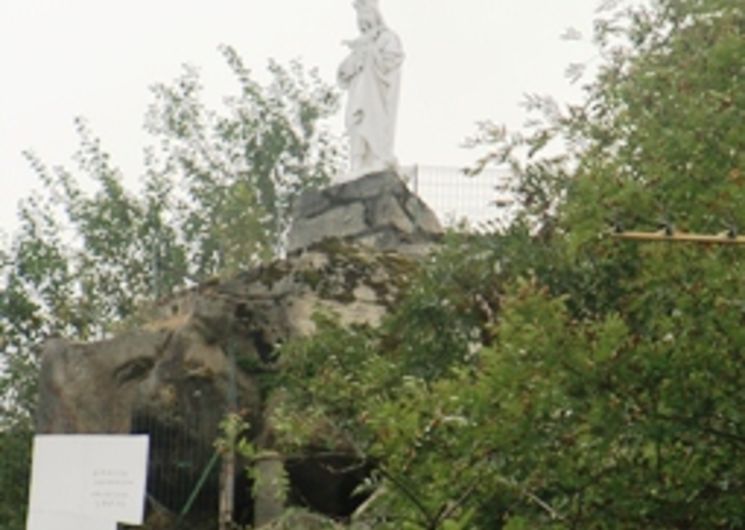 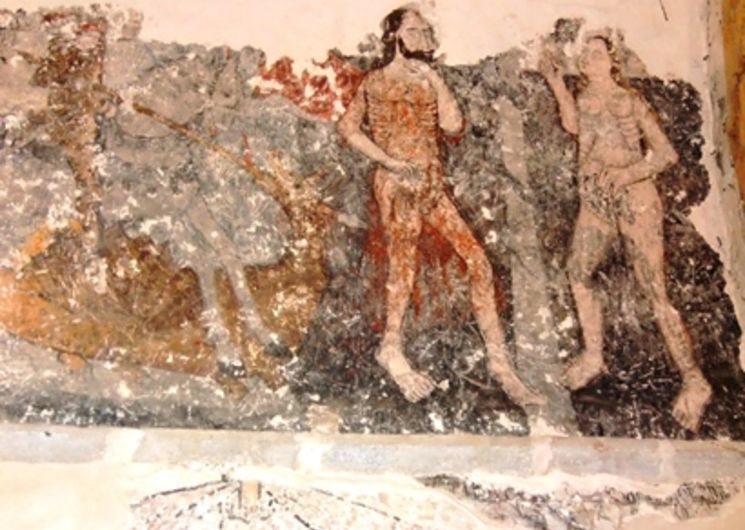 The village belonged to the lords of Vergès, patrons and founders of the parish of Sazos.The Romanesque church is dedicated to Saint Julien, it is considered by G. BALENCIE as one of the most interesting of Lavedan. It has a beautiful tympanum under a cornice with modillions. The six columns with a clawed base are topped by capitals representing mythological animals: a centaur archery a monster, two birds, a sphinx facing a goat … Tympanum with Christ in majesty, surrounded by the four Evangelists. It is close to that of Luz-Saint-Sauveur. Unfortunately, it is behind a relatively modern shelter and the door is often locked, even on Sundays. Under this shelter are sealed some tombstones of the 18th and 19th centuries. The 16th century tower-belfry with two high bays, part of the base of which has been walled up, has a quadrangular slate roof topped by an unusual chimboulet-type bell tower. This bell tower houses three of the five initial bells mentioned in an episcopal report. The smallest one seen from the street, on the left, is dated 1871. It replaces the old cracked bell. The second one, seen on the right, comes from the casting of two old bells in 1869. They come from the Ursulin Dencausse foundry in Tarbes, as does the smaller one at the back which is also dated 1869. The chevet is consolidated by three flat buttresses that rise to the cornice supported by frustrated sculpted modillions. The middle buttress is widened halfway up to make room for a window. On the south facade, there is a geminated window without its median column, a sixteenth century enfeu (burial niche) with a sarcophagus decorated with sculptures. We imagine that it was used by the priests of the church. We have a date sure 1637, burial of Bernard LAYRÉ, priest. We can think that the tomb had been used before. Take advantage of your visit to greet Notre-Dame des Bergers on the hill. In the past, it was a gathering point for shepherds, at the departure and return of the transhumance. Inside, the 16th century murals represent on one side of the nave, Adam and Eve separated by the tree of temptation and on the other, Saint George on his horse, slaying the dragon with his lance. These frescoes appeared during the restoration of the church in 1999. In the right chapel, the frescoes are from the 19th century. In fact, the whole church was covered with murals. Traces of them can be found everywhere, including around the baptismal font. The superimposed tribunes are visible on each side of the nave, as in the Basque country. The apse in cul-de-four shelters an altarpiece with tabernacle (close to that of Grust) of the 18th century attributed to the Soustre workshop. The date 1717 and Soustre are mentioned on the tabernacleThe altarpiece presents the Assumption of the Virgin Mary framed by the gilded wooden statues of Saint Julian and Saint Sebastian. The old wooden high altar was replaced in 1900 by a concrete altar. The centre of the gilded wooden tabernacle, surmounted by a canopy, represents Jesus on the cross surmounted by God the Father blessing with his right hand and holding the world with his left. He is flanked by Mary and John. The side panels represent the passion of Christ: the one on the right, Jesus in the Garden of Olives and the one on the left, Jesus before Pilate. The half-recessed baptismal font, made up of a Romanesque vat, is covered by an 18th century conical wooden cupboard, as in the church of Grust. The sacristy was added to the north chapel in the 19th century. It contains beautiful 18th century furniture, including a chasuble cupboard.The church is opened by the town hall on Wednesday afternoons.Sources : www.patrimoines-lourdes-gavarnie.fr Traduction automatique par DeepL via DATAtourisme