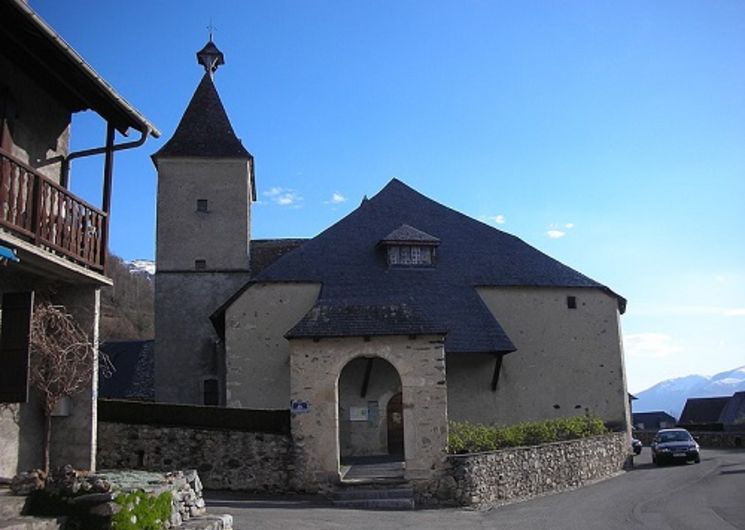 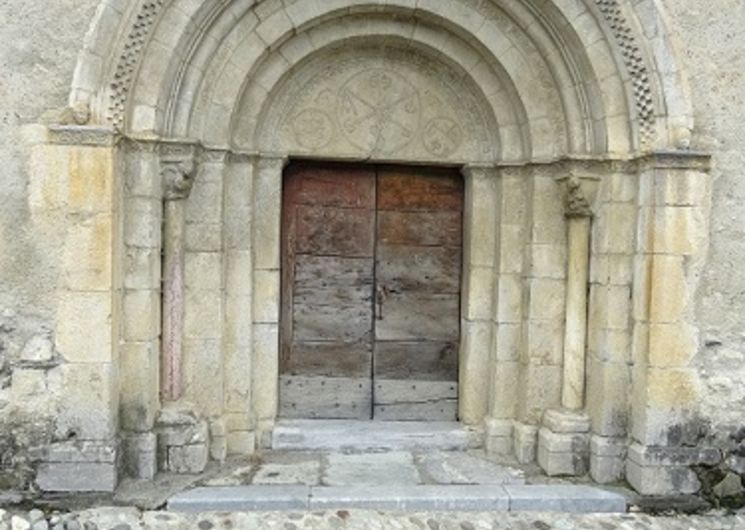 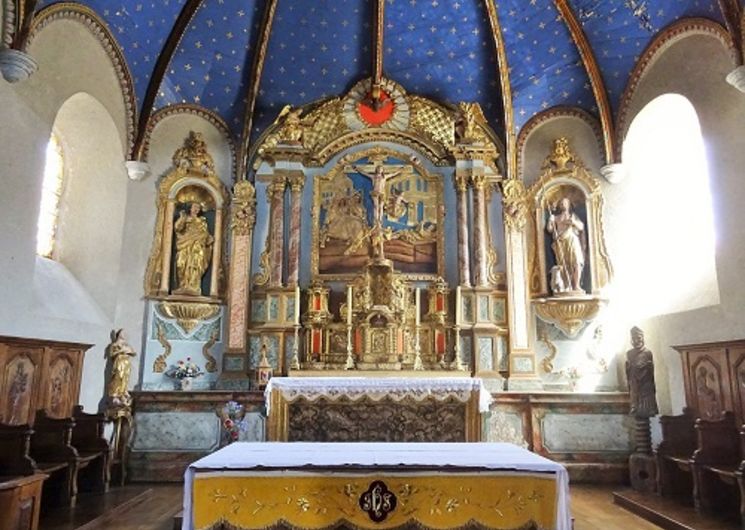 The parish church of Saint Felix in Girona dates from the 13th century (1234), with alterations in the 17th century. Restored in 1960, it was declared a historical monument in July 1922. In fact, it was built over an older church. Probably the first church of the Val d’Azun, because None was the seat of Archdeaconry and housed a faderne, primitive building of the organization of the Church in Bigorre. Its structure is rather complex, because there are practically two buildings in one: the old one, located North-South, and the more recent one from the 15th century oriented East-West (classical orientation). Hence the relocation of the entrance and the condemnation of the Romanesque portal. This church has a polygonal chevet (15th century) and a second, oldest, Romanesque, semicircular, located in the south with its cornice with a double row of billets (the small squares), supported by sculpted modillions. We can distinguish a bird, an owl, a sheep, a face sticking out its tongue and Saint Priape. The doorway with a chrism originally opening on the south (in front of the road) and which is reminiscent of that of Sère in the Toy Country, is decorated with modillions carved in the limestone. The Chrism on a fractured tympanum, of small size (69 cm), is framed by two circles left sketched: one surrounding the lamb of God which looks like a donkey, the other the dove of peace and two birds. The Gothic capitals supported by pink and white marble columns represent, on one side, the Virgin and on the other, the angel of the Annunciation. The Gothic entrance portal is now on the west side; it can be reached by crossing the space that used to house the small cemetery, whose graves were exhumed in 1963. In front of the façade, there are blocks of a Gothic ogival window from the house with the square tower at the entrance to the village and a small Chrism on a slab, 54 cm in diameter with the alpha reversed. The presentation panel was made by the S.M.D.R.AInside, a very beautiful black limestone baptismal font on a stand, sculpted in the 12th century, representing animals, a hunting scene, a feast, a wedding, a stonemason in his workshop surrounded by his tools with several characters including an oboist (clari), a bagpiper (cabrette), an acrobat walking on his hands, a rider holding a pike and blowing a horn, a crouching dog… It can be noted that the cabrette was very common in the Middle Ages in our region, it has completely disappeared. Of the same workmanship, a stoup also in black limestone, on a stand, covered on two bands, with naive sculptures: a series of wild and domestic animals, a rider, a bear hunt and a tree with two goats. This is a classic image that can be found until the 16th century on the lintels of windows in the valley. Presence of an antependium (altar cloth) in Cordoba leather, offered by Master Jacques NOGUEZ in 1713, and coming from a Toulouse workshopA magnificent gilded wooden altarpiece representing the martyrdom of Saint Felix. It is attributed by some authors to the CLAVERIE workshop of Lourdes. Others attribute it to the master sculptors of Izeste Abel and Jean de LAFORGUETTE. It is composed of a painting sculpted in half-relief and painted evoking the martyrdom of the saint attached to the tail of two horses. It is framed by two pairs of smooth false columns of red marble topped by two angels. In the attic, the dove of the Holy Spirit dominates the whole. The altarpiece was restored in 1963The tabernacle, one of the most beautiful by Jean BRUNELLO of Tarbes, made in 1713. It is composed of three panels separated by twisted columns: a real altarpiece in miniature. On the central panel, over the door, we have Moses praying in the desert, a recurring image in BRUNELLO’s art. On the side panels, separated by twisted columns, we have the Nativity on the left and the Adoration of the Magi on the right. The niches between the columns housed eight statues: St. Peter and St. Paul, the largest, the four evangelists and two angels. They have been removed as a precaution against theftOn the right, a Romanesque chapel dedicated to Saint Blaise, with three deeply splayed semicircular openings. Each one is framed by two columns of red marble from Arras (the Gerbs) or Hautacam. These columns are surmounted by epannelated capitals (roughened). Under the right-hand window was a small cupboard housing a “pool” which was used to wash and purify the sacred vessels and the hands of the priest. On the left, there is a 17th century side chapel dedicated to the Virgin. It is decorated with a painting representing the Assumption. It is framed by two pairs of pilasters whose intermediate niches house statues that are a little out of proportion with the rest of the chapel: Saint Joachim and Saint Anne reading to MaryThe original floor was replaced in 1961 by a paving. The tribune was built in 1705, by the Cagots of Terrenère, a hamlet of Aucun. The church was home to at least two brotherhoods, mentioned in wills, that of Saint-Blaise in 1576 and that of the Blessed Sacrament in 1653.Sources : www.patrimoines-lourdes-gavarnie.fr Traduction automatique par DeepL via DATAtourisme