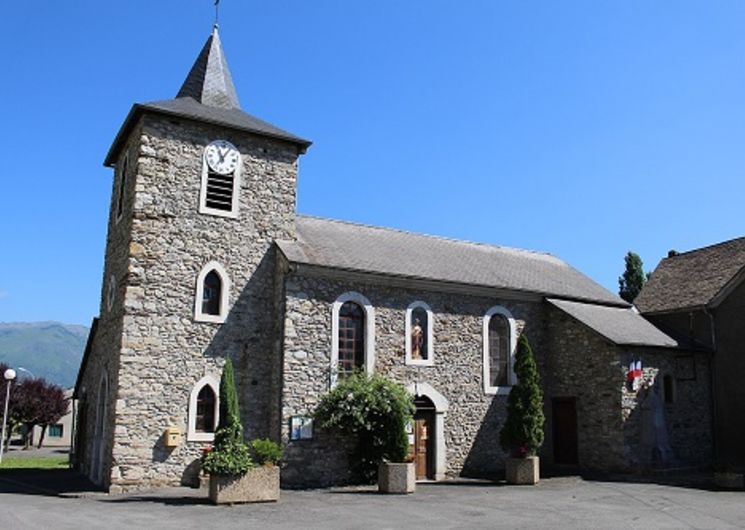 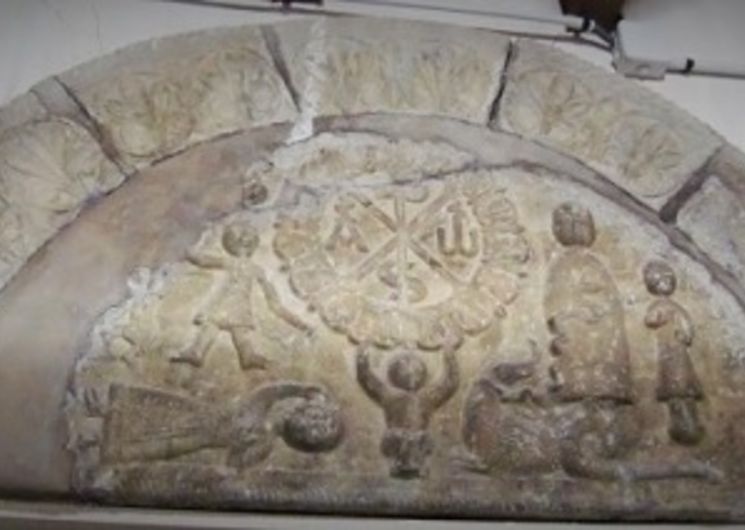 It is a very modified Romanesque church, which once had a wall-belfry with two bells, typical of Lavedan. Part of the church dates from the 18th century, but there are very few records of its construction. Around 1857, the sacristy and the north chapel were added. The bell tower dates from 1887. It was built after the collapse of the old one in 1860, which had already replaced the original wall-belfryDedicated to Saint Bartholomew, this church looks modern, despite its Romanesque tympanum (probably from the 13th century) in re-use, located above the interior entrance. The latter houses a Chrism adorned with a circle of palmettes, 38 cm in diameter, quite unusual and well made. The figures that surround it do not seem to be by the same sculptor. They are more frustrated. The chrism is supported at arm’s length by a crouching man. It is surrounded by enigmatic figures: on the right, two people. The first has been likened to the archangel Michael who is said to be holding the dragon monster in chains at his feet. To his right, the smaller standing figure, dressed in a short dress or shirt, is supposed to represent, for some authors, Saint Margaret, Saint Matilda or Martha, for others the church. To the left of the Chrism, two “children (?)” seem to be dancing on a reclining figure. This one, it seems, is holding a stone in the hand of his raised right arm. Some authors see a scene of stoning, the two “children” are supposed to throw stones. The whole would be a theophanic interpretation represented of the Apocalypse according to St. John, when the archangel Michael comes to slay the Evil (dragon). A detailed analysis of the two scenes was carried out in 1974 by Marie-Louise THÈREL for the bulletin of the national society of antiquaries of France.Inside, the single nave is bordered on the left by a small chapel. On the altar, the small 18th century tabernacle decorated with the symbol of the Trinity was renovated in 2002. Beautiful statue on a pedestal of a Virgin and ChildThe stained glass windows were donated by the daughters of the famous doctor CALOT (Berck), who was then living in the Château Miramont; they date from the 1920s. They represent, on the right, Saint Joseph (stained glass window in poor condition and in danger of falling) and, on the left, Mary and her Child.In 1759, Cyprien DESPOURRINS, Lord of Miramont was buried in the church, then outside during the renovation. We have not found any trace of his tombstone. With the disappearance of the adjacent cemetery, it is possible that the grave was located under the site of the current car park. For the moment we have not found any text on this subject.Sources: www.patrimoines-lourdes-gavarnie.fr Traduction automatique par DeepL via DATAtourisme