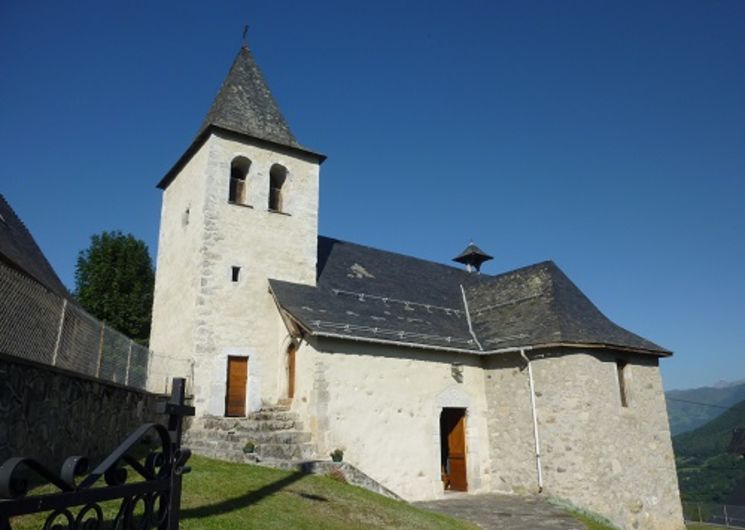 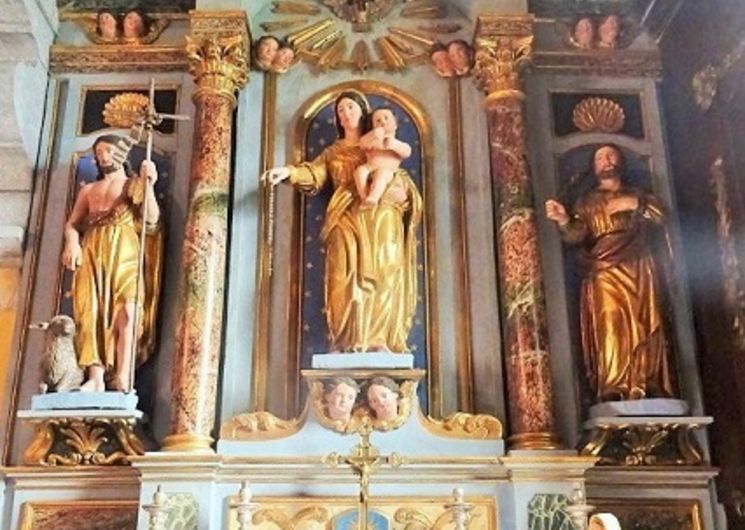 The church is dedicated to Saint André. It is an imposing Romanesque building from the end of the 12th century with a semi-circular chevet and a robust bell tower reminiscent of that of Viella in the Toy country. Renovated in the 18th century, it was newly restored in 2001. The roof is surmounted at the back by a chimboulet (bell tower common in the region).The side entrance door on the south side is surmounted by a small well-preserved Chrism on a 60 cm diameter lintel. It is close to that of the churches in the valley: Marsous, Aucun. It is supported by two corbels engraved with a Greek cross on the left side and, on the right side, with a cross of Saint Andrew, patron saint of the church. A second door under the bell tower gives access to the gallery. The cemetery has been moved to be replaced by a lawnInside, the single nave, with a half-transept, ends with a beautiful baroque altarpiece attributed to the Claverie workshops in Lourdes: in the centre is Saint Andrew and his cross. He is framed by two smooth columns of painted wood, in the style of faux marble from Caunes-Minervois, and by two saints. On his left is St Peter with his key and on his right is St Paul with his sword. The upper part, characteristic of the workshop, represents a “glory”, the mark of the workshop in lourd. In the centre of this, a dove spreads its wings amidst clouds. The decoration is completed by two kneeling cherubs and two large vasesThe tabernacle is attributed to Jean BRUNELO, but quite large, it seems to come from another church. The central figure represents Christ Ecce Homo (Here is the man) covered with his “royal mantle of derision”; he is framed by St Peter and St Paul in their niche. On the attic, framing the glory, two kneeling angelsThe high altar, of the curved tomb type and decorated with angels’ heads, is from the same period as the altarpiece (1750-1760).The chapel of the Virgin and the Rosary houses an altarpiece which is also thought to come from the same workshop. It is composed of three niches separated, like the central altarpiece, by two smooth columns, painted in faux marble. The central statue, a Virgin and Child, under a glory, is flanked, on its left, by Saint John the Baptist, recognizable by his standard cross and the paschal lamb at his feet, and on its right, by Saint Joseph, recognizable by his fleur-de-lis, symbol of purity (chastity). The Holy Spirit, above Mary’s head, is there to protect her. Opposite, beautiful 18th century woodwork with a bench complete the decor. The U-shaped tribune with its simple railings, but with its base decorated with a painted frieze, has a rather rare construction in Lavedan.The shepherds’ mass is celebrated every year in this church.Sources : www.patrimoines-lourdes-gavarnie.fr Traduction automatique par DeepL via DATAtourisme