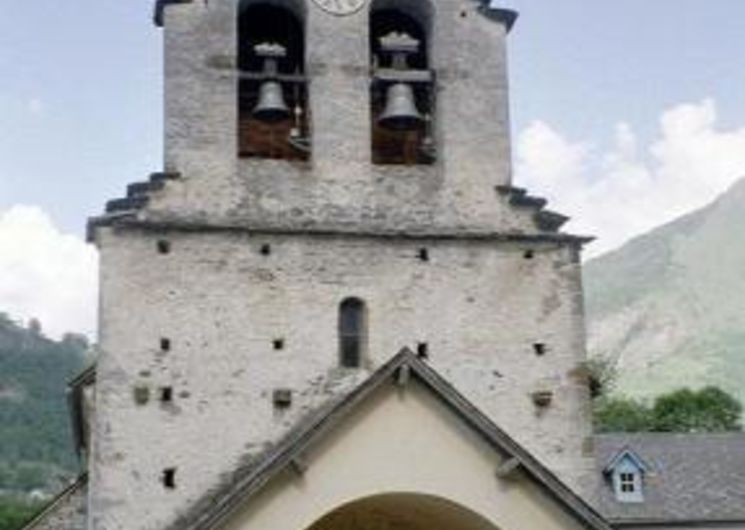 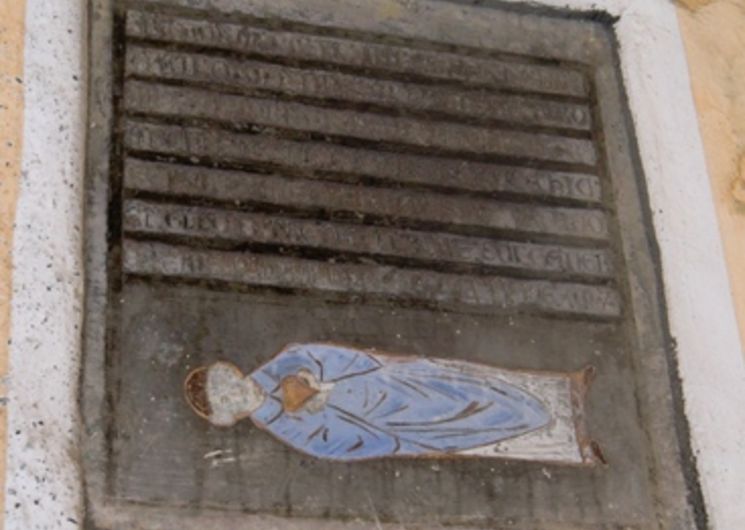 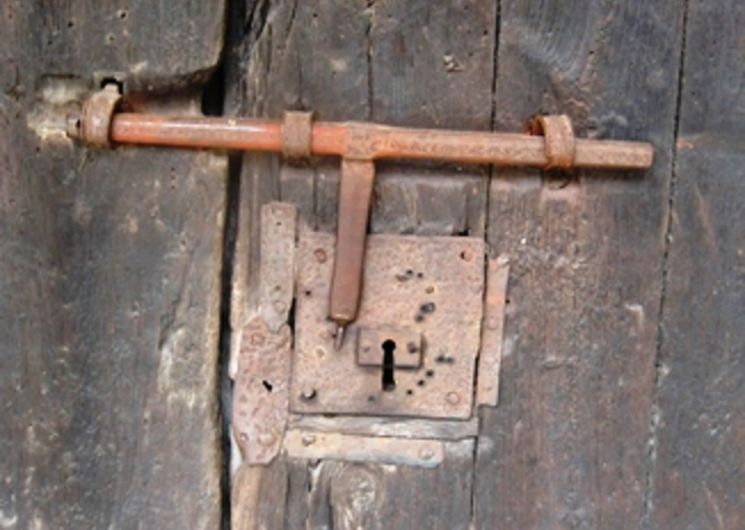 The small Romanesque church (XIIIth century) with its two-storey wall-belfry, dedicated to N.-D. de l’Assomption, has two arcaded openings which house two bells. The larger one dates from 1889 and the second from 1894. Both come from the Ursulin Dencausse foundry in Tarbes. The church has a chevet made of pebbles from the Gave, supported by two flat buttresses. It is decorated with a cornice supported by modillions in the shape of bezants and human and animal heads. A recent unusual porch (1929) has altered the beauty of the facade. Tympanum with chrism. On the right, on the burial ground, the portrait engraved horizontally with a funerary inscription in Latin is that of the archpriest of Barèges, Vital de Puio-Dessus, who died in 1294. A chrism of 80 cm on a semi-circular lintel decorates the entrance door. This church is of the same type as that of Sazos, with one less buttress at the apse. The wall-belfry is decorated with two semicircular bays supporting the bells. One enters the church through a very old door from the 13th century, with a lock that still works. The building deserves a salutary restorationThe enfeu: on the right of the porch, above the enfeu, is embedded a stone of 65cm x 55cm, representing, horizontally, a character topped by a funerary inscription in Latin. It is mentioned after the translation into French: “In the year of the Lord 1294, and the month of February, died Me Vital de Puio-Dessus de Sassis, parish priest of Sère, archpriest of Barège, who was buried with his brothers Yspan and Guillaume de Théna, and with other relatives, whose souls by the mercy of God rest in peace. Amen.” The figure wears a Gothic chasuble with long sleeves covering an alb, his hands are crossed over his chest and his head is covered with a cap. He carries a large chalice. The whole was painted and was repainted in 1929, during the restoration of the porch.Vital de Puio is mentioned in a document of 1280 concerning the faderne of Juncalas. Jean BOURDETTE mentions him in his “Annales du Labèda”. With the archpriest of Lavedan, Vital had a certain power in the appointment of the priests and the distribution of the “pontifical taxes” between the priests of the country. I have not found any trace of a possible exhumation of the bodiesInside, there is a 13th century sculpted granite font and a 14th century painted wooden Virgin and Child standing, Virgin of PityThe small altarpiece, with four twisted columns covered with pampers from the 17th – 18th centuries, is not attributed. Beautiful Pieta in polychrome wood, with the Virgin with an expressive lookNext to the building, outside, very beautiful stone fountain decorated with a bronze eagle by J.-J. DURANCET. It was stolen in 2015 and is, therefore, no longer visible. Sassis would have been founded by a reverend father abbot of Saint-Savin. He had, says the legendary story, installed in the village, a breeding center for dairy cows of the lourdaise breed. Around 1530, the Hospitallers of Saint-Jean-de-Jérusalem, owners of the fortified church of Luz-Saint-Sauveur, had a smallholding in Sassis to feed their pilgrim guests on their way to the shrine of Saint-Jacques-de-Compostelle. For history and literature enthusiasts, there is a monograph on the commune of Sassis, written by the village teacher in 1887.The church is open on Wednesdays from 2 to 6 pm.Sources : www.patrimoines-lourdes-gavarnie.fr Traduction automatique par DeepL via DATAtourisme