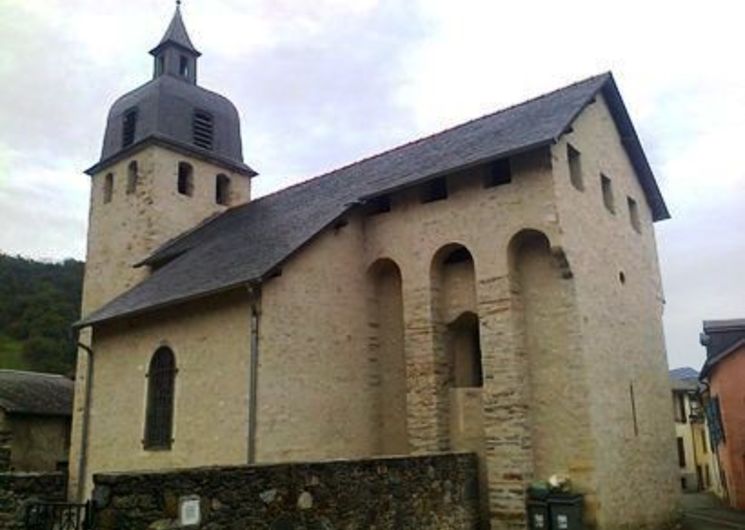 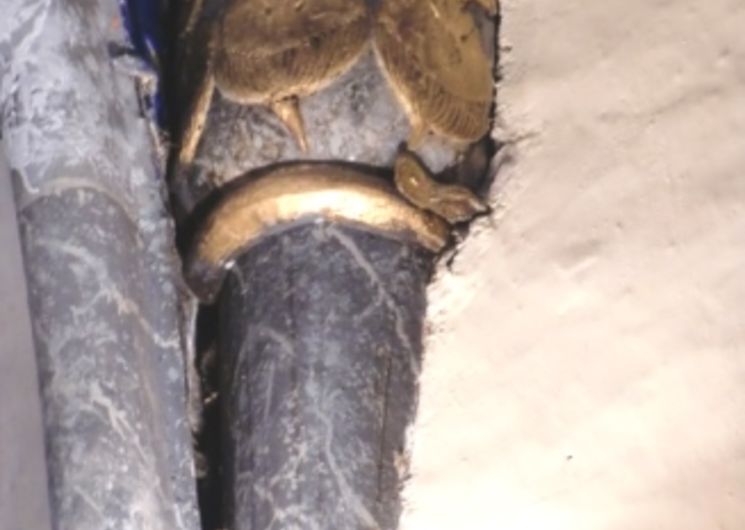 The 12th century church of Saint-Pierre de Nestalas (des nestes = torrents) has just been superbly renovated (2011). The sanctuary was fortified around the 14th century. Above its original chevet, presence of machicolations with a walkway resting on buttresses in round arches and at each end on a console with triple redents.The entrance to the Cagots at the base of the wall of the apse (some suggest a Romanesque window) has been walled up. Its reopening is planned at the end of the renovation works. The corbels supporting the lintel are decorated with two sculptures: a bird on the left and two fish on the right.The bell-tower with its bulbous door is from the 18th century, it replaces the old wall-belfry. It suffered a little during the earthquake of 1854. The small garden in front of the south façade has taken the place of the old cemetery.Legend has it, according to M.de LAGRÈZE, that in 1369, the villagers refused to participate in the guarding and maintenance of the “castle” of Saint-Savin on the pretext that their newly fortified church was sufficient for their defence.Inside the two-aisle building, the blue starred ribbed ceiling is decorated with frescoes towards the altar, with the head of Christ in the centre. This is framed by the four Evangelists and their attributes. Behind the main altar, one can admire a beautiful altarpiece, late 17th century, in painted and gilded wood. It is attributed to Jean BRUNELO like the tabernacle. It represents Saint Peter looking at God above him, in his paradise, surrounded by cherubs. Saint Peter with two keys (?) is framed by two twisted columns decorated with pampers and putti. He rests on a pedestal overlooking a richly decorated tabernacle. The side panels with their scrolled fin are decorated with angels’ heads from which hang garlands of fruit.This tabernacle with its finer figures, also attributed to BRUNELO, evokes the Annunciation on the right panel and the Nativity on the left.The two 18th century side chapels, with painted wooden vaults, are dedicated to St Joseph and Our Lady. The chapel of Saint Joseph houses a statue on a false tapestry background. That of Our Lady, with its Greek temple-shaped altarpiece, is composed of a triangular pediment supported by four smooth columns with Doric capitals in imitation marble. The painting represents Saint Roch and his dog (1852). It is the work of Jean CHEVAUTY, a painter of rural Gascony Catholicism. In the cartouche of the altar in the Roman style, the letters A and M interlaced stand for Ave Maria.The bases supporting the ribs of the vault have a peculiarity that we have not found in any church in the country; they are composed of a conical cone apparently garnished with pomegranates (the fruit). The pomegranate is a fruit with a high symbolic value since the dawn of time and in many latitudes. A symbol of fertility for the Romans, it was slowly transformed during the birth of Christianity into a double symbol of Christ. Firstly, it is a symbol of charity and love of neighbour through its many gifts. Secondly, it is the fruit that among all known fruits, has the hardest crust, so it encloses, gathers and protects its seeds but also gives cohesion to the compact group so that it can mature and acquire wisdom. It is rarely found in churches. We found one in the medieval sculpture of the church of Saint Germain l’Auxérrois where a monkey is fighting with a quadruped to appropriate a pomegranate.The baptismal fonts, of beautiful Bigorrean workmanship, have their own drain hole, a rather rare detail, and sculpted doors with louvers. The old stoup known as the “Cagots” has been transferred to the new church and dates from the 14th century. After the renovation of the church of Saint-Pierre, which is currently being completed, we hope that it will return to its original placeSee some beautiful old houses in the area, rue BossuetVisit of the church possible on request at the tourist office.Sources : www.patrimoines-lourdes-gavarnie.fr Traduction automatique par DeepL via DATAtourisme